The Evolution of the Vehicle Rescue Strut

Struts 101: The Evolution of the Vehicle Rescue Strut

In talking with Rescuers around the world, I often ask this question: "What is your primary job at a motor vehicle accident with a trapped victim?" They most often respond (looking at me like I'm an idiot) "get the tools and cut the victim out."

They are, of course, wrong.

And whom do we most often need to protect the patient from? Us, the Rescuers!

Let's go through a typical vehicle accident. For this article we will use the example of a vehicle on its side, after a collision with victims trapped. Arriving Rescuers need to position their vehicles to protect the scene while searching for hazards such as power lines and leaking fuel or chemicals. These hazards need to be addressed and resolved prior to extrication. Next is typically the positioning of charged hose lines for immediate response to fire. Most Rescuers perform these steps correctly.

Now our Rescuer is looking at a very heavy lump of deformed metal and plastic with an injured victim somewhere inside. Here is where Rescuers typically start doing things wrong; they fail to adequately stabilize the vehicle. 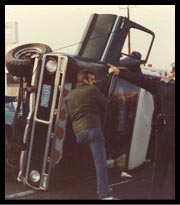 To better understand why Rescuers often do such a poor job of stabilization and why stabilization is so important, we need to learn a bit about the evolution of the motor vehicle. In the past, most vehicles were manufactured with a heavy steel frame upon which were bolted or welded heavy steel cages and skins. We call these vehicles "bricks." When they rolled over in a crash they would deform somewhat but tended to retain most of their shape. Unfortunately for the victims, most of the forces of the crash impact were transmitted through the vehicle to their bodies. When these vehicles ended up on their sides it was fairly easy to stabilize them with wedges and wood cribbing. Since the cribbing could push against the steel frame and thick steel skin, the vehicle would be fairly stable.

When I started in the Rescue Service in the early 80's, any further stabilization was provided by the biggest Rescuers literally leaning on the car! Interestingly, the philosophy of the Rescuers was also different. Stabilization was not thought to be very important. It was perceived that our job was to move metal. The vehicle would be rocking with guys climbing all over it prying parts off with the primary rescue tool of the day, the Spreader. Considering how delicate a victim's spine is with a broken neck or back I'm sure we further injured many victims because they were unnecessarily moved and jolted around. Sometimes these inadequately stabilized cars shifted or fell, resulting in Rescuers becoming victims. 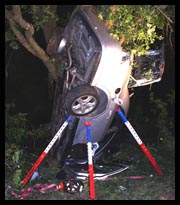 Today's vehicles are made of lightweight metal cages with thin springy sheet metal or plastic panels spot welded or glued to the cage. We call these vehicles "beach balls". When they roll they tend to bounce around like a ball because of the resilient, dent resistant panels and lightweight construction. We are seeing vehicles that have bounced into trees, on top of other vehicles, into buildings and other unusual positions. Stabilizing these vehicles can be extremely difficult and requires the ability to support loads off the ground. During crash impacts the panels and crush zones of the vehicle deform, absorbing energy and translating forces around the victims, thereby improving their chances of survival. The result is that we now arrive to find a crunched up ball of plastic and metal with a viable patient in the middle of it. The vehicle may also be precariously perched on top of another vehicle or other object. When we pound wedges or cribbing between the ground and vehicle we get very little effect because the dent resistant panels flex and absorb the wedges. Because of this, we have lost the ability to stabilize most of these vehicles effectively using wood or plastic cribbing alone.

Rescuers have also changed. Virtually all Rescuers are now medics. We understand that our primary job (after protecting ourselves) is patient care. The last thing we want to do is to cause further injury to the patient in the process of delivering them to advanced Life Support personnel. To do this, we must completely stabilize the vehicle, use care when using the modern day primary extrication tool (the Cutter), and delicately handle the patient's spine while removing and transporting them. The first and most crucial step is stabilization, and most Rescuers are bad at it.

Why do we do such a poor job of stabilization? There are several reasons. Some are:

How do Rescuers deal with these "beach ball" vehicles? Rescue equipment designers (I am one) understand how new vehicle technology has evolved, and have responded with equipment to solve these issues. The technical term for these tools is "Tensioned Buttress Systems". The simple term is "Struts". 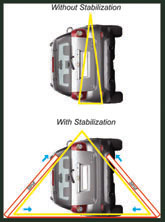 Before we can understand Struts and what they can do for us, we need to learn a bit about the physics of stability. The easiest way to picture stability is to use a triangle. If you have a triangle with a narrow base sitting on the ground, it is easy to tip it over. Widen the base of the triangle and it becomes much more stable. Anyone who has ever used an aerial apparatus knows that extending the outriggers widens the base of their triangle making the apparatus more stable. Our crashed vehicle on its side is sitting on a narrow base, and the cribbing placed below it is fairly ineffectual. By positioning Struts against it and tightening them into place we dramatically widen the base of our triangle and improve stability. It is hard to understand how much Struts stabilize a vehicle until you have seen them in action. Within minutes you are able to convert your "beach ball" into a rock solid platform, creating a safe working environment for the Rescuers and protecting the victim's spine while extrication procedures are taking place.

So what is a Strut? Basically it is just a stick. In fact the first Struts used were wood timbers. Struts have been around for thousands of years, but it wasn't until recently that they started to become popular in the rescue field. There are two reasons for this. First is the evolution of motor vehicles from "bricks" to "beach balls" which has eliminated much of the effectiveness of traditional cribbing. The second is the development of advanced materials such as high strength Aluminium (Aluminum) and advanced composite materials such as DuPont™ Kevlar® Structural Composites. These have allowed equipment designers to build extremely strong Struts which are light weight and do not take up much room on already overloaded apparatus. These materials have also given manufacturers the ability to produce Struts that both stabilize loads and lift/support loads.

* Not all strut brands are available in all countries

Which one is right for you? Wood shoring is extremely inexpensive and is better than nothing. Prop type Struts are sufficient for departments who do not see many vehicle accidents and have another Rescue group that can bring in more advanced equipment for difficult jobs. Stabilization/Lifting Struts meet the needs of most vehicle Rescuers and are typically carried by those who carry hydraulic rescue tools and airbags (lifting bags). Heavy Rescue Struts are typically carried by Rescuers who are trained for large building collapse or trench rescue.

Whichever type you choose, to do a good job with today's "beach ball" vehicles you need Struts!

The evolution of vehicle design demands changes in rescue techniques and tools. Your responsibility as a Rescuer should include vehicle stabilization in order to maintain a safe working environment for you and your crew as well as safeguarding patients. To that end, Struts should be considered an essential tool in modern vehicle rescue.

Tim O'Connell is an ex-nuclear submariner and has been a Firefighter for over 25 years. He holds technician level certification in vehicle extrication, trench rescue, heavy rescue, swiftwater rescue, confined space rescue and high angle rescue. He teaches numerous extrication classes throughout the western USA. Tim is also the president of Rescue 42, Inc., a manufacturer of advanced rescue and firefighting equipment.