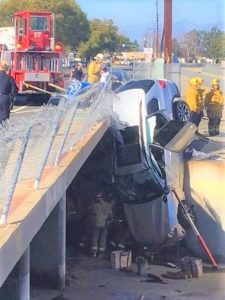 Officers were dispatched around 1:50PM to Woodruff Avenue and Spring Street for a single car collision incident.
“The vehicle was nose down on the channel,” said Long Beach FIre Department spokesman Matt Dobberpuhl. “Los Angeles county provided a heavy record- a large truck with a crane arm on, which lowered the vehicle onto the channel and will be towed from there.”
Authorities did not say how the crash occurred.
The Long Beach Fire Department removed the driver from the vehicle where he was transported to a local trauma center in stable condition, according to Long Beach Police Department spokeswoman Arantxa Chavarria.

Click image to enlarge. View all Struts in Action